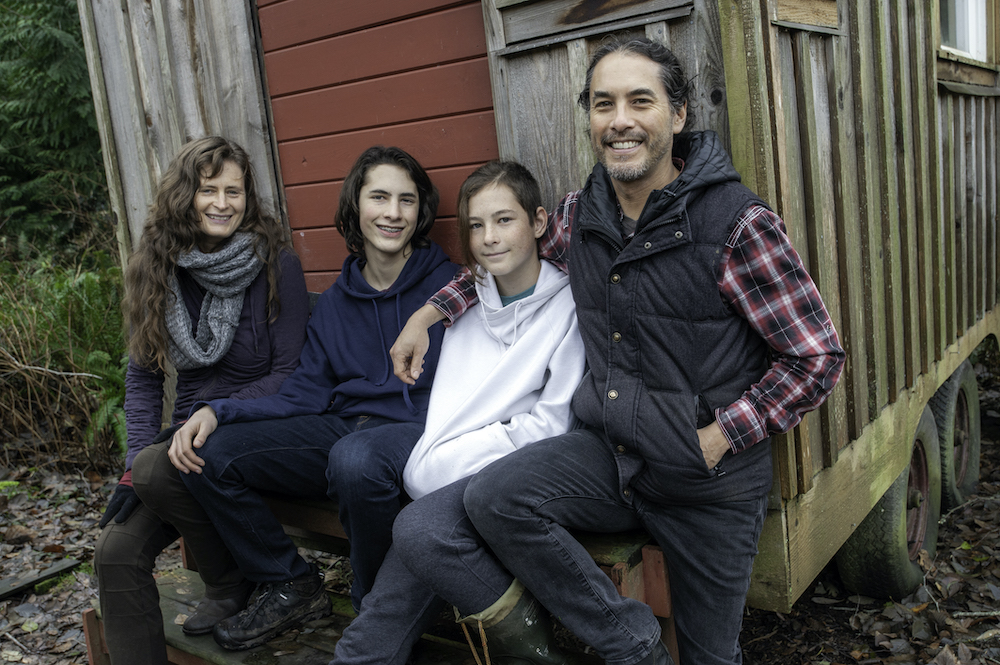 Halfway up the mountain, hiking on an old logging road, I neared a 15-foot Western Hemlock. its top just beginning its languorous droop, and its branches were bright with new growth. I reached my hand and brushed the electric green needles – sharp, yet soft – and sent a silent request.

Greetings, tree. May I nibble your tips?

I’d begun talking to plants earlier in the spring, a few weeks after the Quarantine began.  I wanted to have conversations with living beings, the kind that I had sought with my own kind for so long -- communications that were spirited, energetic, alive.

Did I sense consent? Or merely project it? I was, and still am, new at the vegetal language, unsure if I was saying the words right, or understanding the reply.

I went with my instincts, plucked a chartreuse frond the size of my fingernail, and lay it on my tongue.

Wait a second. Isn’t hemlock what killed Socrates? Cup of hemlock? Am I going to die because I just ate 3 HEMLOCK TIPS?!

Heart pounding, I reached into my pocket, and pulled out my Know-It-All.

Ticky-tack, beep-boop-bap, the black rectangle reached to the sky, the digisphere, querying the clouds. The clouds proclaimed: Not the same.

Embarrassed, relieved, I thanked the tree. My companion Oro cocked his head, stared at me, from beneath a furry brow, concerned. We moved on.

The trail branched in three directions. Oro and I chose the one marked, “Fossil”.

I looked for more snacks. The Oregon grape shoots had hardened off; the huckleberries weren’t yet ripe. More hemlocks invited my sampling.

Bringing more green tips to my lips, chewing, opening myself, I continued climbing the mountainside. I passed jungles of salal, the forests of bracken fern, alders leaning drunkenly against each other, and my heart filled with envy.

The trees thinned, and gave way to rocky outcrops - the home of the wildflowers, pinpricks of purples and yellows. The stellar jays and camp robbers swooped and danced to my whistles and hoots.

I held out a cracker as an offering, threw it to the ground and fled when I heard the voices of other two-leggers, noisy primates yelling back and forth to each other a few dozen meters below.

I turned the final corner of the ascent, and reached the peak, with a view in all directions.

From the south, I heard a mechanical hum, melding with the soft whistle of the breeze, emanating from a communications tower a hundred meters away. A Magic Pinnacle, girded iron and metal, sending out waves of energy to mobile Know-It-Alls and Fantasy Screens in all directions, absorbing this region into the global cybernetic apparatus: how can these constructions seem so ordinary, so mundane?

Facing east, towards the rest of the nation, the red maple leaf fluttered on a flagpole, celebrating the settler state’s hostile triumphs. A prideful rainbow had been painted, playfully, around the pole, only enhancing the pretence of innocence.

I looked down the eastern slope to Nanaimo, and listened to the distant hum of traffic and industry. A map set in plexiglass named the islands, the landmarks, the distant mountains across the Salish Sea. Newcastle, named because of the coal mines that dug under the bay. Gabriola, for a minor Spanish explorer.  No mention of the Snuneymuwx, whose name was taken for this port city, twisted to fit English tongues.

Nanaimo: one of Queen Victoria’s termini, established by her earth-spanning Hudson’s Bay Corporation, bent on turning nature’s energy into royal riches.  Along the mountainside, the evidence of the exploitation was rife: the stumps bore the mark of Chinese labourers, the trails still rutted by the steam equipment and falling trucks brought here take the timber. To the west, a wide valley lay patchworked by clearcuts, blank annihilations among the green.

This mountain is called Tetuxwtun in Hul’qumi’num, the language of the Snuneymuxw; a sacred place, named after one of the first peoples to come to the area, who, according to elder Willie Good, landed there after the Great Flood. Tetuxwtun was relabelled Benson by the British navy in the 1850s, for the itinerant doctor Alfred Benson, brought to supervise the coal operations for the Hudson’s Bay Company. Described in local media as a “honest but lazy grumbler,” this doctor stayed a mere five years in the area, before scampering back to England.

The blunt force of colonial cartography, casually splintering an ancient geography and spirit. The blindness to the past of those born to the maps and charts of Empire. These are effects and endpoints of the real pandemic, a social virus of coercion and domination that has no vaccine.

I sat on Tetuwxtun’s shoulders, munching a sandwich, and suddenly recalled a recurring dream, or motif, of my youth: of an enormous voidful sphere, coming and closer and closer towards me; or I approaching it.

The sense of relentless growth came back to me: the dark wall filling the horizon, and that sensation of flattening, stretching, hollowing, accompanied by a pull to see that Dark Planet ever closer.

Before I had left the new parking lot at the foot of the mountain, I had called my friend, a Snuneymuwx Knowledge Keeper. He happened to be on the mountain, too, surveying the Snuneymuwx Forestry lands on another part of the slope. When I awkwardly asked for guidance, thoughts, he told me to be safe, to keep gratitude in my heart.

I was looking for permission, and seeking clear rules. I had hoped for my friend to say it’s ok, go ahead, climb that mountain, enjoy yourself; or to stay off that mountain, that’s a special place, don’t go there. I wanted exoneration for my participation. Or perhaps I wanted the oversweet taste of guilt.

Permissions and rules: such is the currency of the disciplinary society, its wealth. The Quarantine has presented the perfect crisis to grow the equity of governance. The handsome figurehead at the helm has curtailed gathering and curfewed movements with chilling benevolence under every smiling fatherly dictate: Follow orders. Control yourselves. Together, we can defeat death. Have a nice day.

In my middle years, I’ve learned to cry over the cruelty of modernity, over my own complicity.  I’ve learned that without roots my leaves always wither in the end, my flowers fall to the ground, my seeds. I’ve forgotten how to be planted.

Standing at the summit, I silently broadcasted my lament.  Enough of the meaningless declarations of alliance, and signals of virtue. Enough of the empty braveness on the screen.

Let me begin where it all begins, with what goes in and out of me, through the entrance, my mouth. Let me learn some of the old words, learn to speak them properly, give them magic. Let me taste again the flavour of interconnection, the land as food and home.

Dark clouds swiftened my lunch. The flag changed direction. Haych’qa, Tetuwxtun. Arigato, thank you. I packed up and left the summit. On the descent, the green of the Hemlock tips no longer seemed as bright without the sun, but still smelled as sweet.